Stay in the know

Menabrea, is celebrating the 100th  staging of the country’s most famous cycling event by giving Scottish drinkers the chance to challenge their friends in a unique simulated mountain climb cycling race.

The Giro D’Italia takes place annually throughout May and June, with the race route incorporating several mountain stages through the Italian Alps and Dolomites. The mountain stages are known to be some of the most challenging in world cycling, with long sweeping downhill stretches rewarding the cyclists once they’ve reached the top.

On the 14th stage of this year’s event, the race will pass through Biella, home to the family run Menabrea brewery.

The brand’s Race to Biella bike will tour pubs across Scotland in the coming weeks, challenging drinkers to take on a hill stage of the renowned race. Successful riders who reach the summit ahead of their virtual opponent will automatically be served an ice cold pint of Menabrea, poured from an interactive beer tap connected to the bike.

Victorious riders who share a picture of themselves on social media, holding their winner’s pint of Menabrea, using #RaceToBiella, will also be in with the chance of winning a holiday for two to Northern Italy. The trip will stop at the Menabrea brewery in Biella, as well as the famous city of Turin. Limited Edition Menabrea cycling jerseys are also up for grabs.

The Race to Biella tour will stop at: 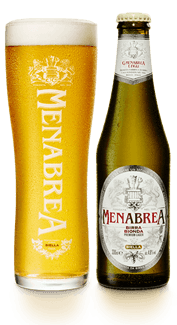